You are here: Home Calligraphy
By: Julie BlannerLeave a Comment
Posted: 1/7/19 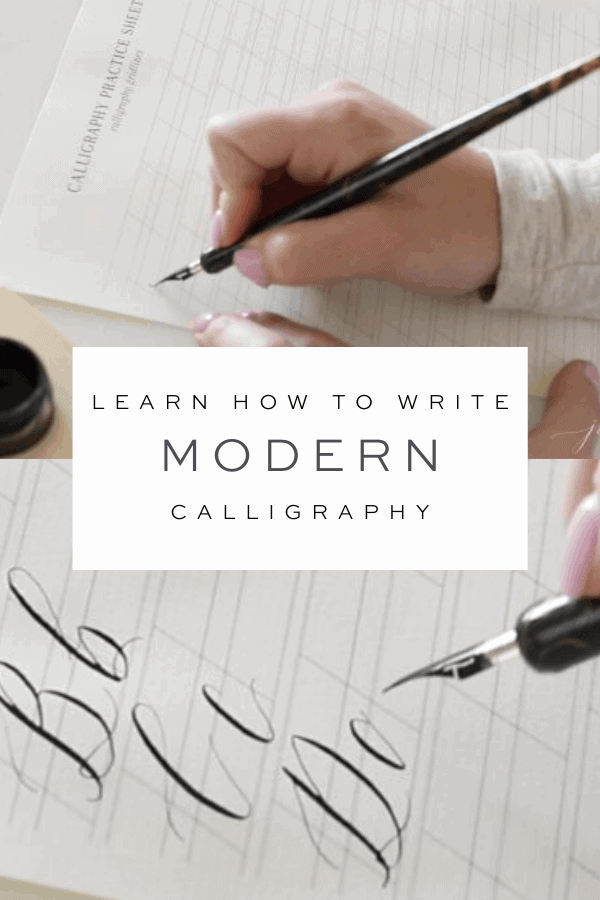 Learning calligraphy is easy when you take it one step at a time! Today Alicia, calligrapher from On Three Designs is teaching you the modern calligraphy alphabet via video and step-by-step photos. She’s immensely talented and in addition to addressing wedding invitations, she designs them along with crests / monograms, personalized dog artwork and so much more!

Learn individual calligraphy letters and master each with a little practice. Alphabet letters look so much prettier in modern calligraphy! Soon you’ll be ready to address an envelope or create a beautiful piece of art! If you’re just getting started, I highly recommend you start here! Even better, sign up here to have the series delivered directly to your inbox.

Each lesson will be delivered in order to allow you time to practice. After all, practice makes permanent.

The calligraphy alphabet is often referred to as various fonts, however calligraphy is letters drawn by hand. While practice makes perfect, you’ll find that your natural handwriting will still influence your individual letters. That’s why it’s importantly to be thoughtful of each stroke and examine each letter to ensure accuracy.

“Fonts” are referred to as a hand in calligraphy.

Let’s see a few more calligraphy letters going light on the upstrokes adding pressure on the downstrokes, shall we? You can see above that Alicia gently put the tip of the nib down to the paper to prepare for an upstroke. And completed the “J” with a heavy downstroke. This is true for all calligraphy letters.

“What seems so hard now, will one day be your warm up.”

Tips for Mastering the Calligraphy Alphabet

How to Perfect Calligraphy Letters

After you write each letter, compare to the printable exemplar and see how you can improve it. Note any differences and try again! Calligraphy alphabets are built from a series of basic shapes. Be consistent.

Are your closed counters the same approximate widths? Open counters? Again, consistency is key in your calligraphy letters.

You can get the traditional calligraphy alphabet here.

If you know someone who would enjoy this tutorial or calligraphy series, please share!

Check Out My Other Calligraphy Posts: